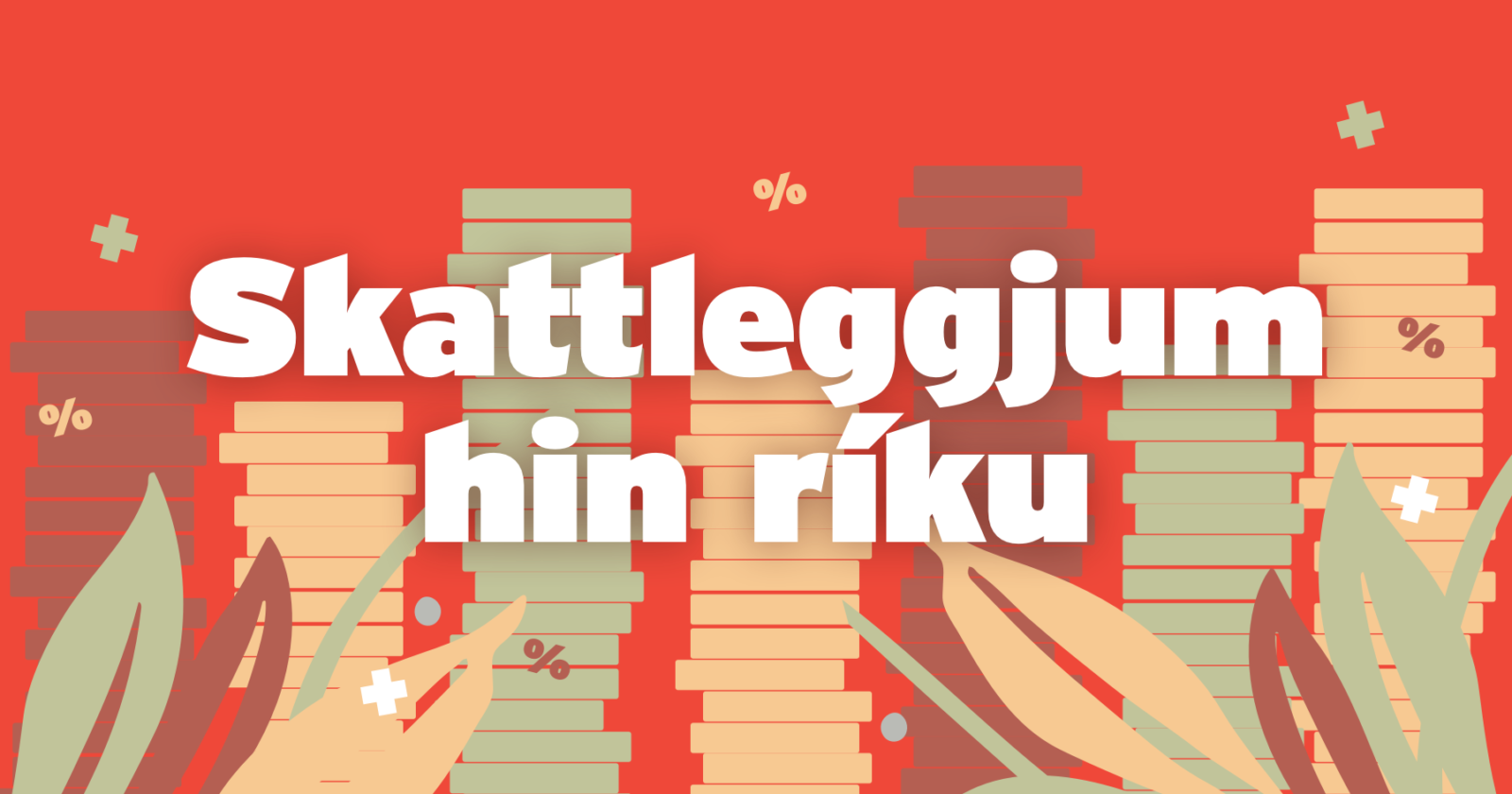 SOCIAL TAX PART I PART I:
Let us tax the rich

The breakdown of the tax system in the neo-liberal years was a counter-revolution of the rich, aimed at the post-war idea of ​​the welfare state. This revolution not only transferred magnificent funds from public funds to the wealthy, but also greatly increased the tax burden of the arid population and multiplied public service charges. The richest escaped taxes and became much richer. And the public paid for the bottle.

Tax cuts for the rich were justified by the fact that lower taxes on capital and business owners would stimulate the economy so that everyone would benefit. This is the so-called bread crumb theory, a delusional theory that has long since fallen. In addition, it was argued that with low taxes, tax revenues would increase as tax evasion would decrease. The experience was the opposite, the capital in tax havens increased significantly during the neo-liberal years. Lower taxes on the rich did nothing but increase the wealth of the rich. The result was a weaker position for public funds. This situation was then met by the sale of public property, privatization, outsourcing of public services, increased tariffs and tax increases on workers and the general public, especially those with middle incomes and lower incomes.

It is the nature of a capitalist economy that it constantly transfers money from those who have little or nothing to those who have a lot and always want to acquire more. The tax system of the post-war years was intended to counteract this unnaturalness, to protect society against the dictatorship of wealth. The instruments were progressive taxes; to tax in particular wealth, super-income and the size and scope of the market. Neoliberalism broke down this system and unleashed wealth on society, amplified the wealth and power of the rich and crushed the power of the people.

But now neoliberalism has fallen as an ideological policy and no one is advocating the bread crumb theory without blushing. There is therefore no reason to maintain a tax system based on neoliberalism. The basic premise of a just society, built on the interests of the people, is to abolish the tax policy of the cruel economy of the few and to build a tax policy that suits the charity economy of the masses. The first goal of that policy is to combat wealth accumulation and tax the rich.

I. We tax the rich:
Wealth tax

To counteract the injustices of capitalism, which is constantly shifting money from the masses to the few, it is necessary to impose a wealth tax. Wealth tax is a wealth tax that is levied on assets in excess of what can be considered the normal property of well-to-do middle-class people at the end of their working lives. Wealth tax must be tiered, from 2% on net assets in excess of 200 m.kr. for couples up to 9% for couples who own more than ISK 10 billion. It can be estimated that less than 1% of taxpayers will pay wealth tax, over 99% of Icelanders will not pay such tax.

Property taxes are the oldest taxes in Iceland. The tenth century of the republic was a property tax. Property taxes were levied in Iceland for over 900 years, until neo-liberal extremism ruled them unjust. Wealth tax was imposed here temporarily after the Crash, among other things to be able to tax part of the threatening profits of the bubble years.

The goal of the wealth tax today would be to tax the wealth that the rich have accumulated due to the tax revolution of the neoliberal years, to restore part of the wealth they sought in the public fund. This is therefore a tax on abnormal wealth accumulation in other circumstances. The neo-liberal years’ plans for a massive tax cut for capital and business owners were never presented to the nation, as voters would then have rejected them. Now is the time to show that will in action.

I. We tax the rich:
Capital income and high-income level

We tax the rich:
Inheritance tax

Inheritance tax is basically income tax. Those who inherit receive assets and money and this should be taxed as other income. This is the basic rule. There is, however, an agreement in society that the normal inheritance from one generation to the next from tax collection should be excluded, that support systems within the families should be respected. This is in the spirit of the post-war tax system. The marginal tax on inheritance tax, the highest tax level, was comparable to the highest level of personal income tax.

The reduction of the inheritance tax in the neoliberal years has, first and foremost, benefited the wealthy, creating a hereditary class of wealthy people who inherit not only great wealth but the power and social status that comes with it. The increase in inheritance tax is therefore a natural defensive response of the democratic system of the public, a protection against our society turning back into the domain of the hereditary class.

We tax the rich:
Socialist offer

The Socialist Party’s fourth offer to voters in the autumn elections to restore tax collection on the rich is to impose a wealth tax to recover what the richest people got out of common funds in the neoliberal years, to tax capital income in the same way as wage income, set high income levels inheritance in the same way as other income if it exceeds the price of a good apartment.

The purpose of this is not only to generate revenue for the state and rural funds, but also to increase justice and the distribution of power within society. Unrestrained capitalism that the tax system does not oppose creates a dictatorship of wealth, a society of injustice and cruelty. The tax system is therefore a tool for implementing greater love, reconciliation and justice.

But this is not enough. The rich have innumerable ways to evade tax payments, both within perverted laws and by hiding assets, falsifying income and evading tax payments in other ways. Low taxes on the richest are just another arm of the tax policy of the cruel economy. The other is a myriad of exemptions and poor tax controls.

Another goal of the tax policy of the socialist tax system is therefore to close the streets in the tax system and greatly increase tax control for large companies and the rich.