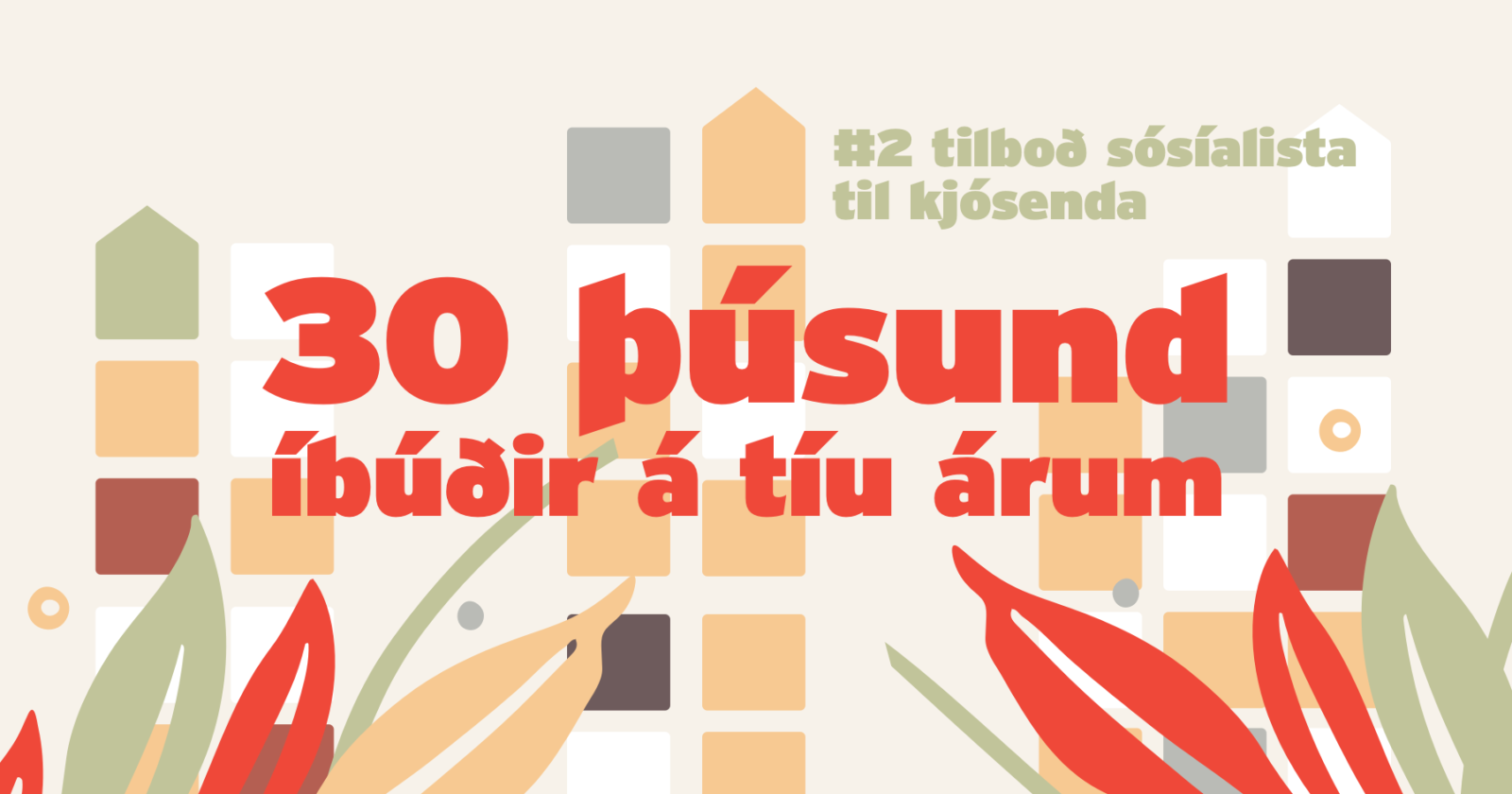 Housing costs are the most serious threat to the living standards of the population today. The most important task of the public sector is to ensure safe and affordable housing for all Icelanders. No single project will have as good a general impact on society in the next election period as what the Socialist Party of Iceland calls the Great Housing Revolution.

According to official surveys, more than a third of families in Iceland have difficulty making ends meet. The main reason for this is high housing costs. Solving a persistent housing crisis is therefore the most important step in improving general living standards.

The historical reason for the housing crisis is, on the one hand, that the Icelandic government did not take steps comparable to the neighboring countries in the last century in the development of a social housing system, and on the other hand, a complete overhaul of housing in the neo-liberal years. The destruction of workers’ housing and the dramatic weakening of social rented housing were probably the most serious consequences for the living standards of the population during this tragic period.

But the collapse of other parts of the housing system also had a serious impact on the performance and security of the public. With the auction of plots of land and the takeover of building contractors, which were previously largely controlled by the public, either directly or indirectly through building cooperatives, house prices rose far in excess of construction costs. Oligopolistic companies managed to maintain a shortage in order to maximize their burden and thus managed to double the cost of housing for the public in just a few decades. The entry of large investors into the rental market then undermined the living standards of tenants.

The result of the neo-liberal years was a far too expensive housing market that sucked endless money from the masses and brought the few, rich and powerful, at the same time as tens of thousands of households were kept in poverty and gnawing insecurity.

The social housing system is between one third and up to half of the housing in our neighboring countries. Here it is well below 10 percent. The main reason for poorer living conditions here than in neighboring countries is that a larger proportion of households in Iceland try to survive in an unrestricted housing market; handed over to contractors and landlords and large fluctuations in house prices and interest rates in the financial market.

What is the need?

The estimated accumulated housing shortage is currently around 4,000 apartments. This is a plan based on unchanged basic assumptions of the current housing market. This figure therefore does not include long waiting lists for the social housing of the municipalities, waiting lists for apartments for the disabled, students or the elderly, nor an assessment of what is needed to eliminate the modern neighborhoods; industrial housing and other uninhabitable housing that many of the lowest income earners have to accept. The Socialist Party of Iceland therefore estimates the accumulated housing need today at 8,000 flats.

It is estimated that 2,000 apartments will need to be built annually in the coming years. As before, this is a plan to maintain the housing market unchanged. It does not take into account young people living in parental homes but would like to have the opportunity to start their own home, lower-income families who would prefer safer housing if it were available or homeless people living with relatives and friends. It is the opinion of the Socialist Party of Iceland that it is more appropriate to target the need for about 2,200 apartments annually in the coming years.

But the need is first and foremost for secure housing that is protected from fluctuations in house prices and interest rates in the capital market. If all these apartments are built within a social housing system over the next ten years, the proportion of that system as a whole will increase from just over 8% to almost 25%. As before, the proportion of social housing would be among the lowest in our part of the world.

What is the solution?

The Socialist Party of Iceland is offering voters the opportunity to vote this autumn with the great housing revolution, the construction of 30,000 apartments in ten years, which will go a long way in eliminating the local housing crisis.

This will be done by establishing a public housing fund that will raise 70% of the necessary capital by issuing bonds that will be sold to pension funds and other investors. The collateral of the bonds is secure, residential housing in a secure long-term lease, and will therefore bear interest comparable to government bonds. About 13% of the cost will be provided by the state and municipalities in the form of plots and 17% will come as a loan from the state treasury at the lowest interest rate, a loan that will be repaid during the life of the apartments. The cost of capital will therefore be as low as possible today.

The design and decision on the structure of the housing can come from both the Public Housing Fund or the Rent Associations. Once an agreement has been reached, the Housing Fund will tender for the construction of the apartments. In order to ensure cheap construction and to break down the oligopoly of contractors, the state will establish the State Construction Association and promote the establishment of municipal construction associations and cooperatives of construction workers. Together, these construction companies will implement non-profit housing development to get rid of the outrageous burdens of contractors. Burdens, profits and dividends do not belong in the social housing system.

It is the role of the Public Housing Fund to adjust its same financing to the life of the houses, their maintenance and the normal operating costs of the Rental Companies. The goal is not for one family to repay the financing, construction and operating costs of the apartments over forty years, but these costs will be spread over about 120 years. With this, it can be expected that rental prices in this new system will be about half lower than is customary today within non-profit companies and much lower than is customary in the untamed rental market.

Those who would rather own an apartment than rent it can do so by contributing equity at the beginning of the contract period and owning the apartment against the Housing Fund. The rental price of the rental companies is adjusted to the lifespan of the apartments and rent therefore pays the construction cost over a very long period of time. If the owners want their holding to grow, they can agree to pay higher monthly payments, depending on the capacity and goals of how fast the holding grows.

Owner-occupied flats in this system will not be sold on the market any more than the old workers’ flats, but people will have their equity contribution and shareholdings calculated based on the same interest terms as pension funds receive from the Public Housing Fund. This system is closed and protects the residents from market fluctuations and apartments are sold back into this closed system.

What will be the effect?

The great housing revolution will take control of the housing system from contractors, large investors, banks and financial companies, and transfer power to the public. Apartments will be built according to the needs, hopes and expectations of the public and not for-profit companies. Hustlers can build their apartments but they will be outside the public system and enjoy no support from the state treasury. The supply of affordable housing within the great housing revolution will hold back housing price increases in the wild market, as price increases in recent years have been driven by a planned shortage of housing.

A reduction in housing costs will lead to a general improvement in living standards. The general public, and preferably those currently in the wild rental market; young people, immigrants and low-income people will have more at hand and will therefore stimulate the economy with funds that previously flowed into the funds of the few and the rich. People’s anxiety will decrease, fewer people will have to work two or three days to make ends meet, slavery will decrease, people will have more time with their children, relatives and friends and have more time to socialize and actively participate in society.

The construction of the apartments will create employment and stimulate the economy after the economic contraction of the coronavirus epidemic. The design and implementation of apartments and neighborhoods will be a lever for society and the development of different residential cores will increase the diversity of human life.

The ending of the housing crisis will be like the coming of spring after a long, hard winter.

Can we do this?

The scope of the project can be estimated based on Statistics Iceland’s estimate of the construction cost of a so-called index house, which is a cheap apartment in an apartment building without plot costs. According to Statistics Iceland’s calculations, it costs just over 16.8 m.kr. to build a 70 square meter apartment today. If we add 20% on top of this cost for common areas and 10% in design, where the goal is to build good apartments that are suitable for people and last well, then it would cost less than 22 m.kr. to build such an apartment today. 30 thousand such apartments cost over ISK 650 billion. As this is a huge project, it offers great potential to keep costs down with economies of scale and size.

The project is no bigger than this, about 65 billion ISK in construction costs per year for ten years. That is the effort to end the housing crisis.

The Confederation of Icelandic Industries estimates that the neoliberal years’ neglect costs of infrastructure such as roads, ports, utilities and sewers amounted to ISK 420 billion. It should therefore come as no surprise to anyone that it costs around ISK 650 billion to overcome the neo-liberal years’ neglect of the social housing system. And from a societal point of view, it’s even more important.

When the Swedes embarked on their million-dollar project, the construction of a million apartments over ten years, in the 1960s and 1970s, its scope was similar to that if Icelanders aimed to build 45,000 apartments over the next ten years. The first workers’ housing units in Iceland were built during the Great Depression and a major effort was made to build apartments for the disabled at Hátún after the herring collapse in 1968. More examples can be found domestically and abroad, of major housing conflicts that have all benefited. There are no examples in all of human history of major housing initiatives that did not have a far-reaching positive impact on communities.

However, there are countless examples in history of how harmful the persistent housing crisis is to people, families and society. We have experienced such damage in recent decades.

The housing crisis is a political decision, no less than housing construction is politics. It was the decision of the Icelandic government to break down the small social housing system that existed here, to completely overhaul the housing system and maintain a housing shortage here in order to maximize profits from the poor. This has been the housing policy of the ruling economy of cruelty, the policy of many previous governments.