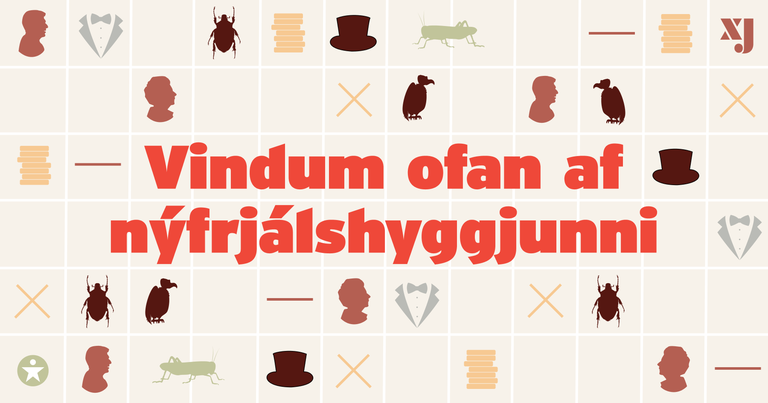 One of the most important tasks of politics is to end so-called neoliberalism. This is a concept that everyone has heard before, without necessarily understanding what it means. This is not surprising, since people are more likely than not to hear this concept in the litigation of those who want to deny that neoliberalism is a phenomenon that exists at all. Those who do so have good reason to say so. After all, neoliberalism is really nothing more than a promise of the prevailing political and economic situation in the West and the whole world in recent decades.

The concept of neoliberalism is an extremely important analytical tool, as it describes and explains the economic policies and ideologies of the West in recent decades as a coherent and holistic phenomenon. It thus makes it easier for people to clearly understand the economic, political and social changes that have taken place – as well as the situation today. Equally important, understanding the changes of recent decades as a holistic phenomenon – which has very clear characteristics, doctrines, and ideas – makes it easier for people at the same time to resist this development.

This is exactly what the dominant interests in society want least of all – after all, the development of neoliberalism in recent decades has been to their great advantage and they do not want to change course in any way.

Neoliberalism is a very real phenomenon. It has had far-reaching consequences in virtually every area of ​​society, from large international institutions to the innermost minds of individuals.

But to fully understand it, you really need to see it from two angles.

Neoliberalism has, on the one hand, a political-economic side. This refers to the theoretical theories in economics and political philosophy that are used as a guide in government policy-making and the economic measures that are taken. The basic doctrine here is that free markets are a phenomenon that will always come to the best conclusion. The state can never know more than a free market, and thus never make better decisions about how society should be organized and its material quality should be divided. The economic policy of neoliberalism thus aims to reduce as much as possible the “intervention” of the state and democratically elected representatives of the economy. This is done through various means, most notably through cuts in the various institutions of society that make it impossible for them to carry out their role (especially those who perform some kind of supervisory role). This is therefore one of the most obvious features of neoliberalism: superstition about the market and its ability to solve all societal problems.

The other side of neoliberalism, however, is no less important. It is what could be called the ideological side. Because neoliberalism does not dominate society only through economic measures and the decisions of politicians and the economists of its advisers. The reason why the same actions are being continued indefinitely, despite the fact that their serious damage has long since been revealed, is that the public is largely uncritical of these actions. Most people take them for granted, even as if it is some kind of natural law where nothing else is available.

This is not because the public is particularly mad. Rather, it is because neoliberalism is the dominant ideology of society.

These two aspects of neoliberalism are thus intertwined and have enabled it to achieve hitherto unheard of results in recent decades. Since the beginning of the 1980s, neoliberalism has managed to infiltrate every nook and cranny of human existence. Whether it’s in the decisions made by International Organizations, or in the behavior of influencers on Instagram. Everywhere, the individual, the private enterprise, and the so-called free market are blessed at the expense of social virtues.

It is no exaggeration to say that the consequences of neoliberalism have been catastrophic on almost every scale.
To name just a few of the most familiar:

In order to unwind neoliberalism, it is not enough to elect other politicians to power who promise an economic policy other than the free market of neoliberalism. As long as the ideological side has this grip on society, the same politicians, with the same old “solutions”, will always inevitably return to power – and continue on the same old path.

This is exactly what socialism is. Socialism is not just a political policy, but at the same time an ideology in direct opposition to neoliberalism and its values.

As opposed to selfishness and self-worship, socialism prioritieses compassion and solidarity

Socialism basically preaches what can be called a proper society. The financial crisis of 2008, which led to the Icelandic economic collapse, was the death of neoliberalism. It was unmistakably revealed how this ideology, together with its economic policy, was a very dangerous fantasy. However, neoliberalism has miraculously managed to survive, as a kind of zombie. No one has a passion for it or a belief in it anymore. Yet neoliberalism continues to dominate society, controlling both politicians’ decisions and their own experiences of existence.

The only thing that can finally bring neoliberalism to the grave where it belongs is socialism. There is simply no other option.

The only thing that will starve under the rule of the Socialist Party are the bank accounts of the rich in tax havens.