Sanna Magdalena: Sometimes we didn’t eat for a long time 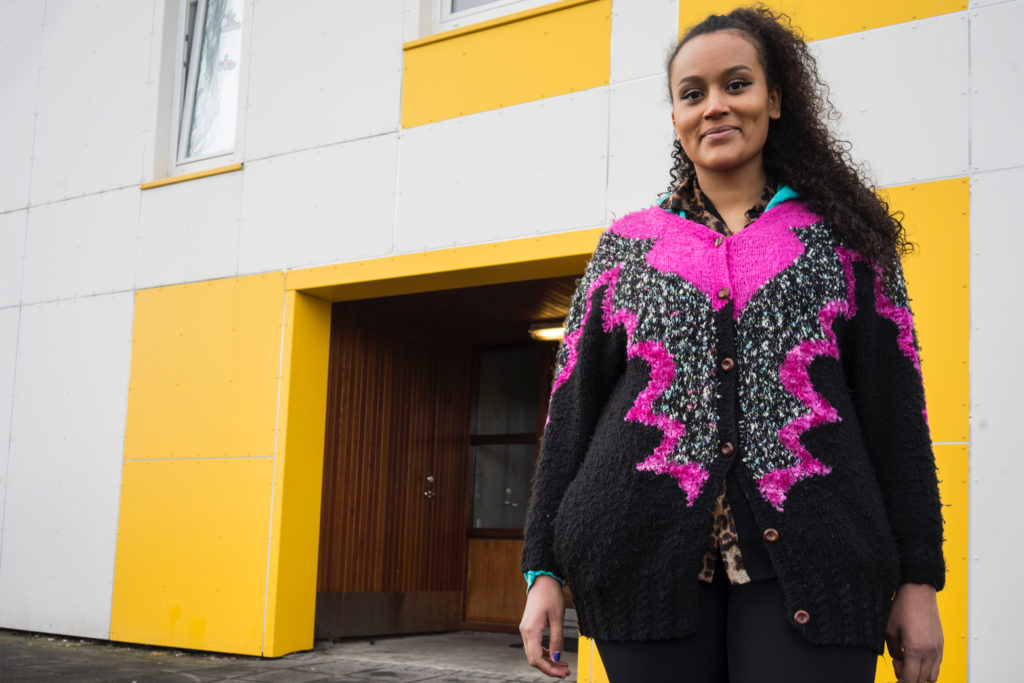 1. Sanna Magdalena Mörtudóttir
The other Reykjavik

“I grew up with a single mom who worked two jobs, as a full-time kindergarten instructor and, additionally, cleaning the place after hours. Her pay never sufficed, not even for the bare necessities. At one time, when she wasn’t cleaning the kindergarten, she washed the floors at Kaupþing bank, a dirt-poor hungry woman cleaning for the rich businessmen. I think many people actually don’t realize that there are people here that don’t have a single króna to their name and who can’t buy food. I remember how in my childhood we were always looking for small change. You’d check all pockets and bags and turn over every pillow and cushion in the hope of finding something. The sofa we got as a present, we wouldn’t have been able to afford it. Once the two of us only had 29 krónur and the only thing we could buy was a roll of Polo mints. We split them between us. At that point we had emptied all our accounts, biked around town for bottles and gone to Mæðrastyrksnefnd. We lived from day to day but sometimes we just couldn’t make it work and we didn’t eat for a long time.

There was a period where we had no fridge, no phone, no washing machine, but we did have an old TV, which had a working picture but no sound. When mom filled in some paperwork she left the phone, mobile and e-mail fields blank, because we couldnt afford any of that. When we got sick we had to go to a phone booth to let people know, provided we had any change to make the call. In illness you’re not really in a condition to make a walk to a phone booth, but that’s the way it is, it’s a hassle to be poor. After nearly three years on a waiting list we got social housing in upper Breiðholt. I was ten years old and we moved from Austurbær. A year before there had been an interview with us in Fréttablaðið about us “mother and daughter on the street” along with a large photo on page two. When I went to school the day after a classmate of mine pointed at me and shouted: “she lives on the street!” I thought to myself that technically we didn’t live on the street, we were able to live temporarily with my grandmother, but that we wouldn’t have our own place if we didn’t find an affordable apartment. You already had this consciousness, just nine years old, that the rental listings didn’t offer anything for you.

Today my mother is on disability benefits because poverty broke her psychologically. So disgusting that systemic injustice can do that to people. I have seen her having panic attacks where she thinks she’s dying, which is what the stress around poverty does to people. Once I came to my mother, she was lying on the floor barely conscious. No matter what I did to her she didn’t react, so I ended up calling an ambulance. When she came to, she said that she’d not eaten for such a long time, that’s why this had happened. She hadn’t wanted me to feel stressed, didn’t want to tell me how bad things were.

I’m an anthropologist today, massively in debt after the BA and MA studies. It was hard having to work along the studies and having regular migraines. The student loans aren’t realistic, which forces you into the claws of other institutions, where there’s no kind love. An enormous overdraft, GAMMA’s Framtíðin loan corporation, Netgíró to have money for food and payday loans are things I know all to well. I have taken loans to repay other loans, because it’s expensive to be poor, you see. You do these things by necessity, even if you know full well how high the interest rates are. It’s ridiculous that people in power have no clue about life in these circumstances, that they live in their cozy privileged bubble. Owners of capital should not have the power to profit off our desperation. A humane system is something I’d like to see, where people aren’t treated like a single-use machine that you throw on the scrap pile when it stops working.”

21. sæti – The other Reykjavik